An Overview of Gabion Retaining Walls 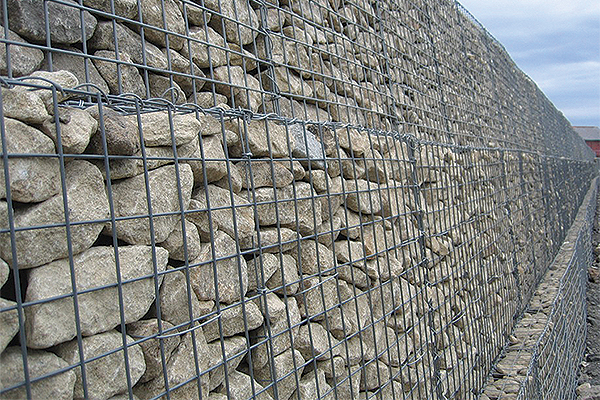 The usual steel meshes used in gabion retaining wall designs are being replaced with PVC coated wire wishes to protect the structure from corrosion which is the major limitation of the structure. Apart from using as embankments, gabion walls are used in landscaping and architectural cladding to big buildings. For designing a retaining wall, many factors like site location, width, depth and length of the wall, type of soil and the load behind the retaining wall should be considered. While constructing large gabion walls, heavy gabions structures are used as a base to provide stability and improve the resistance from sliding.

Other aspects like air flow or intensity of winds in the area should be considered to see if the retaining wall can bear the loads. To handle the unexpected loads which may appear, the base of the gabion walls should be made thicker. If the retaining wall construction site has unsuitable soil like gravel, the soil should be replaced.

Traditionally the gabion retaining wall is filled with quarry rocks. The scarcity and transportation costs involved for carrying the quarry rocks to the project site lead to the replacement of quarry rocks with other filling materials. The alternatives used for gabion boxes are smaller stones, quarry dust, red soil. Steel wire mesh and geo-textiles are also predominantly used in the construction of gabion boxes. The role of geo-textile is to protect the soil from being eroded.

There are firms which deal in the sale of gabion boxes for various projects. The gabion retaining walls are not only used to prevent soil erosion but also help to maintain the stability of slopes. Based on the type of mesh used in gabion box manufacturer, its application differs from railway projects or highway projects. Gabion mattresses are different from boxes with respect to the dimensions. They are shorter in height and are used to prevent wave erosion. Gabion sacks are used for emergency corrosion prevention like river flooding.

Previous Things You Won’t Like About Acoustic Wall Panels and Things You Will
Next Eco products: The future looks green

5 Ways to reduce energy bills as a senior

What Is a Hybrid Bike?

These Are Some Good Reasons For You To Do Tree Trimming.

The Benefits of Having an Eco-Friendly Energy Plan

In recent years, the conversation surrounding the decision to use fossil fuels or renewable energy …